Camilla Lambrick of the Ashmolean Natural History Society writes the third of her seasonal guides to wildflowers at Boundary Brook, to accompany the popular plant species surveys and Plant ID workshops she has been offering at Boundary Brook. 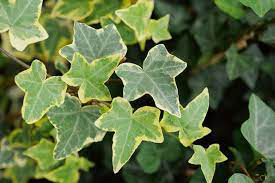 A great provider of nectar after the end of summer is the ivy. This evergreen plant is fascinating for its differently shaped leaves on different parts of the plant – when the plant is creeping along the ground the leaves have triangular lobes like the palm of a hand, but when the plant is high on a tree, in the light, the leaves are oval and pointed. The scented flowers are popular with wasps, hoverflies and the newly arrived Ivy Bee. This species has been spreading across Europe and reached England in 2001. The Ivy Bee is mostly harmless as it is unable to pierce most skin, and when it does it is only as bad as a nettle sting.

The Ivy Green by Charles Dickens

Fast he stealeth on, though he wears no wings,

And a staunch old heart has he.

How closely he twineth, how tight he clings,

To his friend the huge Oak Tree!

And slily he traileth along the ground,

And his leaves he gently waves,

As he joyously hugs and crawleth round

Creeping where grim death has been,

A rare old plant is the Ivy green.

In Ancient Rome it was believed that a wreath of ivy could prevent a person from becoming drunk, and such a wreath was worn by Bacchus, the god of intoxication.

Ivy bushes or ivy-wrapped poles have traditionally been used to advertise taverns, and many pubs are still called The Ivy.

The clinging nature of ivy makes it a symbol of love and friendship, there was once a tradition of priests giving ivy to newlyweds,] and as it clings to dead trees and remains green, it was also viewed as a symbol of the eternal life of the soul after the death of the body in medieval Christian symbolism. 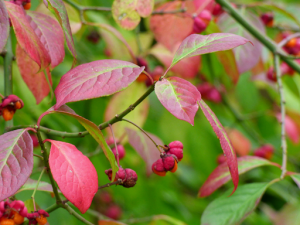 The flowers of the Spindle are inconspicuous, being small and yellowish-green, but the fruits are a dramatic pink and they split open to reveal the bright orange fleshy coating over the seeds!

All to sunset colours turning,

Till the thicket seems to kindle,

Just as though the trees were burning.

While my berries split and show

One by one my leaves must fall:

Soon the wind will take them all.

Soon must fairies shut their eyes

But, before the Autumn goes,

Spindle turns to flame and rose! 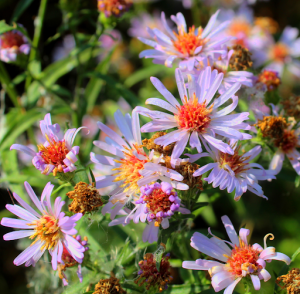 Most of our huge range of cultivated Michaelmas Daisy species come from the USA and some of them are quite invasive giving autumn colour to waste land near human habitation and along riverbanks.

Asters get their name from the Greek word meaning star – the goddess Asterea looked up into the sky and couldn’t see any stars, which made her sad and she started to weep, and where her tears fell, asters began to grow. In Victorian England coded communication through the exchange of flowers was popular, and asters, with their wide range of colours, were a good medium. Purple asters represented wisdom and royalty. White stood for purity, perfection, and innocence. Red asters were devotion, and pink asters were love. Asters still have a symbolic life, they are the official flower of September birthdays, and of 20th wedding anniversaries. They can also still be used for their colour meanings, with a bit of an update. White asters can be used to represent new beginnings, like a graduation or the start of a new career. And red and pink asters can still be used for love, which never goes out of fashion. Both white and purple ones are found at Boundary Brook. Michaelmas, or the Feast of Michael and All Angels, is on the 29th of September. The day is associated with the beginning of autumn and the shortening of days. The Archangel Michael is the greatest of all the angels and is honoured for defeating the Devil. The rhyme: “The Michaelmas daisies, among dead weeds, Bloom for St Michael’s valorous deeds …” As Michaelmas is the time that the darker nights and colder days begin the celebration of Michaelmas is associated with protection during these dark months.

Michaelmas is one of the four “quarter days”. Quarter days are spaced three months apart, on religious festivals, usually close to the solstices or equinoxes. They were the dates on which servants were hired, rents due, leases begun, land exchanged, and debts were paid. Also harvest was completed by Michaelmas, the marking of the end of the productive season and the beginning of the new cycle in farming. This is how it came to be the time for electing magistrates and also the beginning of legal and teaching terms.

Purple and gold, the aster flower Is an image of my autumnal love: Its golden centre is like a torch To kindle joy in the long still night, 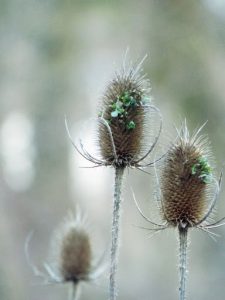 This tall dramatic plant makes a great addition to autumn flower arrangements. Moreover the seeding heads are very popular with goldfinches, and a continuous supply of food can be provided by sprinkling crumbs or Niger seed on the dry heads.

On Gold-Tipped Wings by Wendy Watson

How cheerfully the goldfinch sings

At rest from undulating flight,

A bar of gold on charcoal wings

And crown of scarlet, black and white.

I love to hear his cheerful trill

As tasty teasel seeds he spies.

With long fine beak he takes his fill

Then off on gold-tipped wings he flies.

The flowers are clustered in an oval head. In July and August they start to open in a belt around the middle of the head which then progresses both up- and down-wards.

The prickly leaves of Teasel are joined in pairs around the stem forming a cup that collects rainwater. This is probably the origin of the name Dipsacus which comes for the word for thirst in Greek. The function of these cups is debated – do they prevent insect pests from climbing the stem? And/or do the dead insects in the rainwater provide a source of nitrates and phosphates as in carnivorous plants? The jury is still out.

The name fullonum comes from the use of Teasel heads to raise a soft surface on woollen cloth. A distinct form of the plant with long narrow seed heads was developed for this process.

There are four species of leaf-miner insects which make characteristic patterns as the larvae feed burrowing out channels between the upper and lower layers of Teasel leaves.