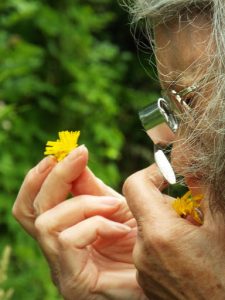 Camilla Lambrick of the Ashmolean Natural History Society writes the second of her seasonal guides to wildflowers at Boundary Brook, to accompany the popular plant species surveys and Plant ID workshops she has been offering at Boundary Brook this summer.

I loved the plant ID session very much, it was wonderful, I was really inspired and wished I realised that I would love to study to become a botanist if only I could.”

The next Plant ID session is 11 a.m.  on Saturday 17th July, with a final session on 28th August.

Compositae, the Daisy or Dandelion family or Asteraceae 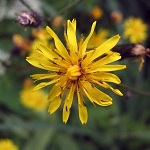 After the dandelions, this is the next dandelion-like flower to get going in May along the road verges. Its tall, branched stems can reach up to nearly two metres tall, and the flowers are 1.5 to 3 cm across. The plant is biennial – growing to form a rosette of leaves on the ground in the first year, and a tall flowering head in the second, and then dying back. Best distinguished from other plants with dandelion-like flowers by having leaves up the stem, and from other hawk’s-beards by the pinkish stripe on the outside of the underside of the outer florets. The hawk in the name is thought to refer to medicinal purposes for eye complaints – to become sharp-eyed as a hawk.

Its Latin name Crepis, coming from the Green “krepis” a textured light cloth that had various uses including veils. From there it went into Dead Latin as “crispus, or, “crisp” meaning curled and wrinkled. Then to French and lastly to English as  “crepe” as in “crepe paper.” 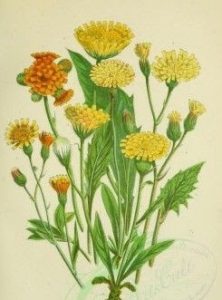 This delightful little lemon-yellow hawkweed prefers dry, lime-rich soils. The upper side of the leaf has long scattered hairs, while the underside is thickly felted with short white hairs.

Umbellifers, the Carrot family, or Apiaceae 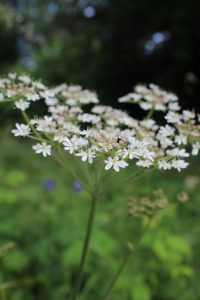 Also called Queen Anne’s Lace or Keck this frothy umbellifer is a familiar plant of roadside verges.  The feathery leaves are deeply divided. As it is easily confused with poisonous umbellifers, such as Hemlock and Fool’s Parsley, eating it is not recommended. The smell of the crushed young leaves is characteristic, while leaves of Wild Carrot (also called Queen Anne’s Lace) are distinctly carroty. Many species of this family are aromatic and have been used as flavourings since Roman times, for instance Carraway, Fennel and Cumin.

Known to Shakespeare as Kecksies

In Henry V, the Duke of Burgundy likens France to a neglected garden:

The darnel, hemlock and rank fumitory

Losing both beauty and utility. 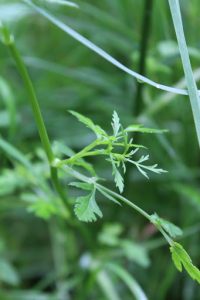 The leaves of this slender umbellifer are less divided than in the Cow Parsley, being once pinnate, that is divided into a series of leaflets down each side of the leaf stalk. The young foliage smells of petrol when crushed, and the aromatic seeds can be used as a condiment. This is a plant of disturbed ground and waste places.

This shade-loving perennial can become a pernicious weed. The leaves are divided into three leaflets and can be eaten as cooked “greens”.

Like the related Giant Hogweed, the leaves of this plant can bring out a nasty rash, though the seeds can be used as a flavouring. The flowers of this plant are immensely popular with a wide range of insects.

Hemlock (not currently found at Boundary Brook, but common on Burgess Field)

This is a very tall plant (up to 2.5 m) with purplish blotches on the smooth stems, and feathery leaves. It is highly poisonous, especially the seeds and roots, giving the infusion which the Greek Philosopher Socrates took when he had been convicted for corrupting the young.

In the Campion family each of the five petals is deeply notched at the tip, while in Ragged Robin the petals are further divided into four slender ribbons. The leaves arise in opposite pairs up the stem.

As Sarah Raven writes in her book Wild Flowers, they:

look a bit dishevelled, like a skinny dandy after an all-night party.  So many flowers are exercises in perfection and prettiness, but Ragged Robin is cooler than that: a Red Campion that has been through a shredder. 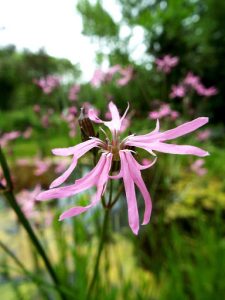 On thin reeds he plays.

He asks for no payment;

He plays, for delight,

A tune for the fairies

To dance to, at night.

They nod and they whisper,

“A princeling is Robin,

For all his disguise!”

Crucifers, or Cabbage family or Brassicaceae 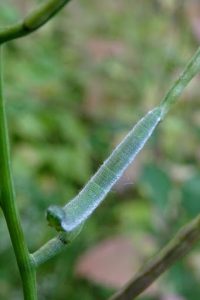 This white flowered, shade-loving crucifer is a food plant for caterpillars of the Orange Tip butterfly. The narrow, green caterpillars look just like the developing seed pods. The young leaves, flowers and buds make a tasty addition to salads. Various parts of the plant were also used for medicinal purposes.

Don’t you know him? Straight and tall—

Taller than the nettles;

Large and light his leaves; and small

Are his buds and petals.

Small and white, with petals four,

If you never knew before,

There is Jack for knowing! 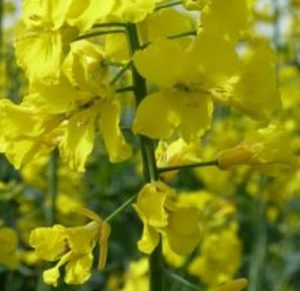 This large, yellow-flowered plant has recently become common on roadsides and waste places, especially along the river. It is grown extensively for its oil-rich seeds, and also provides food for honey production by bees.